The staff at Pratt Fine Arts Center is dedicated to making art accessible to everyone. Our studio managers are working artists who can often be found working and teaching in the studios when they aren’t in the office.

Fumi Amano is a visual artist working primarily in glass. She was born in Aichi, Japan. In order to learn more about glass and expand her horizons, she moved to Seattle in 2013. After receiving her Master of Fine Arts degree from Virginia Commonwealth University in Richmond, VA, she participated in residency programs all over the United States, including Anderson Center in Minnesota, and Torpedo Factory Art Center in Virginia. After coming back to Seattle in 2018, as a professional exhibition coordinator, she managed art exhibition coordination all over the world. With her art experiences in different places such as in Japan and the United States, she is able to create and teach art with her broad vision and an open mind.

Julie Custer is dedicated to supporting arts education and lifelong learning opportunities. A Pratt team member since 2007, she enjoys being part of a creative community and connecting artists with resources. She received an MFA in Fiber from Cranbrook Academy of Art and a BFA in Textile Design from the University of Kansas. Her work was included in the catalog and exhibition HOT HOUSE: Expanding the Field of Fiber at Cranbrook and has been shown at the Kirkland Arts Center, the Burnaby Art Gallery in Vancouver, BC and SOIL Gallery in Seattle. You can also find her in the Pratt studios tinkering with new materials.

Ryan Davis has worked for over 20 years in non-profit administration and higher education and has been a member of Pratt’s leadership team since 2015. He holds a Bachelor of Science in Business Administration and his past experience largely consists of implementing and managing complex enterprise database systems to administer education programs. Ryan is passionate about equity and inclusion throughout society and particularly in the arts, and is also passionate about making music as a member of various bands performing all over the Puget Sound region. As a musician Ryan has helped raise money for charities and community projects for various organizations such as the YMCA, Marysville Parks, and Seattle Children's Hospital. He has served as a Board member and Treasurer at Northwest Folklife and is currently volunteering as a member of the audit committee there.

Kamla Kakaria received an MFA in Printmaking from University of Washington. She works with multiples that are related to each other but not identical to create large pieces. The act of making a piece over and over again feels legitimate. She is able to create a relationship with the form as it becomes a new word in her vocabulary that she is compelled to overuse. Being an immigrant from India her recent bodies of work are related to memories of the beauty and fragility of India.

Bianca Recuenco (she/her) was born and raised in Seattle, WA. She is a first-generation, Filipina American college student who received her B.A. in Communication and minors in Diversity and Gender, Women, and Sexuality Studies from the University of Washington. Recently, she released a photography project entitled, "Bukas na Puso" (Open Heart), and was a panelist speaker for the "Creating Peminist Culture" panel for the Pinay Power II Conference at McGill University. Some of her passions include shifting culture and reimagining realities through film/digital photography as well as creating equitable pathways for holistic wellness, decolonized healing practices, and creative expression for minoritized communities.

Patrick Rich is originally from Clear Lake, Iowa where he spent most of his time reading books or out on the lake enjoying the water. At the age of 19 he fell in love with glass when he attended a community college and discovered its magic through 3 dimensional art classes. From there he moved to Charlotte, NC to work at a production glass studio, forging new friendships and connections in the North Carolina glass community. Through this community he was offered a job to be a glass equipment fabricator at Wet Dog Glass in the small town of Star, NC. He has spent the last 6.5 years practicing and growing his skills in the fabrication of equipment and glass. Patrick considers himself a life-long learner and loves to take on new challenges. He loves culture, community, and food so he is already feeling at home here in Seattle.

Pascha grew up in Seattle, with a deep-rooted love for the Pacific Northwest. Launched with bachelor’s degrees in Zoology, and Communications from the University of Washington, Pascha built a career as a brand strategist and marketer. In roles as Account Lead at Heckler Associates, Principal of her own brand communications studio, Vertetude, and Director of Marketing for a local non-profit, Pascha has created and executed marketing plans for a range of iconic national brands. Original art has played a central role in her projects, creating an emotional bond with the audience, and establishing a unique visual identity for the brand. Love of the arts, accessible to all, drew Pascha to Pratt, where she is excited to tell the stories that uplift and inspire the artist in all of us.

Monica Street is a metalsmith and jeweler. She is the former Vice President of the Seattle Metals Guild. In the past she has taught for the Seattle Public Library, James Washington Foundation, Tacoma Art Museum, BARN, Gage Academy, North Seattle College, Coyote Central and Seattle Public Schools at the elementary to college level.

In 2017 her work was exhibited at the Washington State Convention Center for the SMG Biennial, the Ron Ho Show at POTS Gallery in Fremont and she interned with Catherine Grisez for the Part You public sculpture project at Traver Gallery. Her work was also chosen for a Director’s Choice Award at the 2019 Pratt Auction. Street currently works as the Jewelry/Metals and Sculpture Studios Manager at Pratt Fine Arts Center and assistant to bell maker Gordon Barnett of GRB Bells. As a volunteer with a passion for archives and student resources, she heads the Seattle Metals Guild Video Archive Youtube and North Jewelry Archive on Flickr.

Carson Thomas (she/they) is an interdisciplinary artist and poet originally from Nashville, Tennessee. They hold a Master of Fine Arts in Creative Writing and Poetics from University of Washington Bothell, where they discovered their passion for arts education. Her films have been featured in the Seattle Film Summit, Absurdah Film Festival, and the “Art of the South” exhibit at Zeitgeist Gallery. They recently had their first solo photography show, “Suspension,” at Random Sample Gallery in Nashville, Tennessee. Carson is a recent convert to glass after interning at Penland School of Craft and has found it to be as humbling as it is beautiful.

I am a third generation woodworker, or more correctly, woodworking enthusiast. My grandfather did marquetry, my father made cabinets. I started making string musical instruments around 16 years ago, have been teaching for 5 years, and am excited to be a member of Pratt Fine Arts Center's team.

Natalia was born and raised in New Jersey and has spent most of her life on the East Coast. She holds a BA in Art and Ethnicity, Race & Migration from Yale and an Ed.M. in Education Policy & Management from Harvard. Before joining Pratt, Natalia served as the Director of Visual Art & Maker at DreamYard, an arts and social justice education non-profit in the Bronx, NY. She is passionate about the arts, education, and racial equity, and is excited to bring these interests to Pratt and build community here in Seattle. She loves to learn new skills and explore new media, and believes that maintaining artistic and creative practices allows us to imagine new possibilities and, ultimately, create new realities.

Bailey Zahniser is an artist and educator from Seattle, Washington. She is passionate about aligning creativity with anti-racist advocacy, working with young people, and the power of connecting youth with an art practice and community. She leads with love when creating spaces for healing, community, and advocacy. Bailey uses her own art practice as a way to find healing, rediscover her experience through the world, and challenge the stories that build her identity. 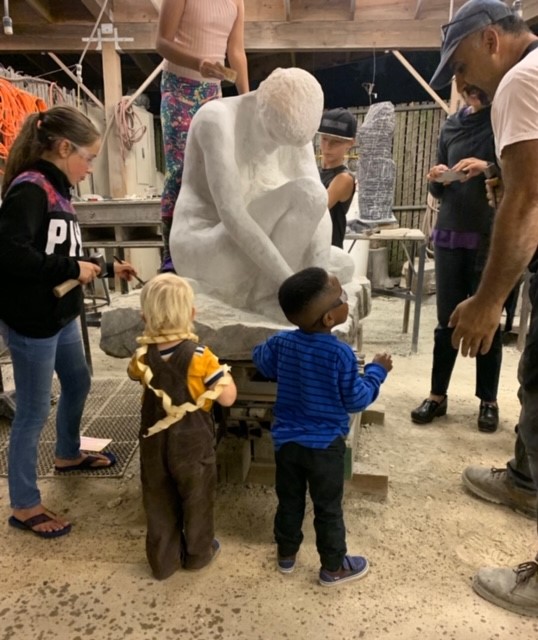 Make a big impact on our creative community with a tax-deductible donation today!

DONATE NOW
Pratt depends on generous contributions to keep our class rates affordable, to offer Pay-What-You-Can classes for local children, to provide scholarships and tuition assistance for those in need, and to bring renowned Master Artists to campus to share creative intelligence from all around the world.

Get updates from @ Pratt Enews


The latest information about Pratt, classes, and events